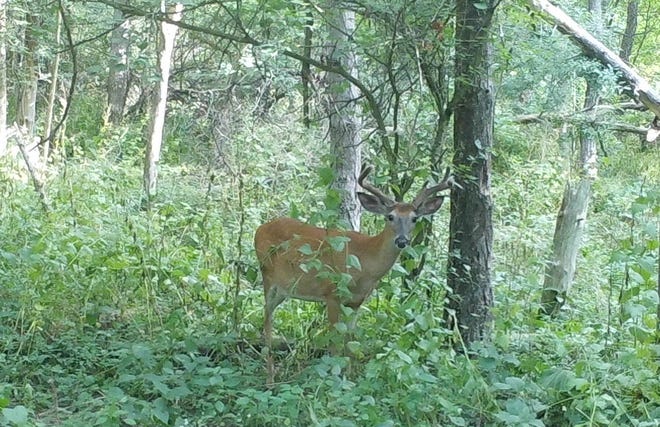 Time to work on the deer stands

As the scorching days of summer draw to a close in August, a sense of urgency, as well as cooler evenings, sets in on this archer. Better prep those tree stands because bow season for whitetail deer in New York and Pennsylvania is only a few weeks and a month away.

If we wait too late, and work on our stands these few days before the season, we risk alerting Mr. Whitetail.

But if we can find some time now to start, well before the season opens, our smell and the changes in the woods will dissipate and the local deer will calm down from the disturbances.

When choosing a tree for a treestand, one that has a multiple or even triple or quadruple trunk is ideal.

In contrast, tree stands on lone poles may look okay for the first week or so of archery season, but when the leaves drop in early October, the bow hunter pops out like a backboard. signage.

Tree supports, whether portable or ladder, should if possible be tucked into a split trunk, at least a tree with one, two, three or four trunks or large limbs.

These trees work best for a number of reasons: the hunter’s silhouette is broken, the hangers (for gear) are handy for the bow and accessories, and perhaps as important as the others, this general feeling of comfort and confidence cannot be denied. compared to a single trunk tree.

When I set up a portable metal stand and pull myself up on it for the first time, feeling the sway of the tree, that familiar sensation portends the excitement to come.

“The ground seems so far away,” I thought to myself, looking through the wire mesh floor of the two-by-two-foot folding platform. (Using a nylon safety harness always gives an extra feeling of support and confidence.)

Robust, does not wobble.

Some need a little pruning.

Covers the main trail across the ridge for a decent distance.

Not too close but not too far either.

These 20-yard shots are ideal.

But before we run amok with pruners and saws, we should take some time and study the winds and consider their swirling patterns.

The realization might sink in that this stand is actually in the wrong place and might be useless.

Don’t fall into the lazy trap and say, “Shit. What a waste of time. Oh, well, too late to do anything now. Good enough.

Even if we’re short on time that day…the next week should find us at the top of that ridge, pulling the support and moving it 20 yards to the other side of the trail so the prevailing breeze (e.g., from the southwest) would be in our faces, hitting the deer on the trail first.

Of course, experienced bowhunters know that either stand can produce deer sightings, but one of the key placement factors, if not the most important, is dependent on prevailing winds and thermals. . And deer hunting is partly a game of playing those percentages.

Here, our deer are truly wild.

Proper placement of a tree stand is crucial.

Most of the time, our winds tend to prevail from the southwest.

As the days get shorter and the cold fronts begin to move from the northwest, our stand selection should take this change in wind direction into account.

And occasionally, but rarely, a Nor’easter or an Atlantic storm will blow easterly winds.

After hanging a stand, the work is still not finished.

Next comes the pruning of tree branches for shooting lanes.

Trim the twigs so that an incoming deer has some cover but at the optimum distance (20 yards). Make sure there are still clear openings for shooting, ideally 270 degrees inside and around the front.

A wide open space in front of a stand is not a good thing, despite what you see on TV or on hunting videos.

Shooting lanes, openings between trees and brush that allow an arrow to fly unhindered, are best. And when a deer passes by, its head is behind a tree or a bush, which gives us a better chance of arriving at full power, undetected.

Many deer got scared when a hunter pulled his bow after clearing too much cover. (Voice of experience here.) What was considered brush clogging in September was the foliage coverage needed for a smooth, undetected draw in November.

And a few tips on sizing a stand: make sure all cut saplings are cut at ground level and best if covered with leaves, soil or logs. Drag sapling and felled limbs. At the edge of the trails. Just good aesthetics to keep the area as pristine as possible.

Back into the stand, imagine which direction the deer will move, imagine the shot. Fold the seat down and see where it’s best to hang the bow, so that when the deer arrives there will be minimal movement and minimal noise from the empennage (or vanes).

But sometimes, no matter how much we plan, imagine and dream, our supports are still not exactly in the right place or perfectly placed on the tree.

Tree stands should be thinned annually not only for proper placement, but also for safety.

And that only comes with time in the pit. Just like our hunting skills, our stands are always a work in progress.