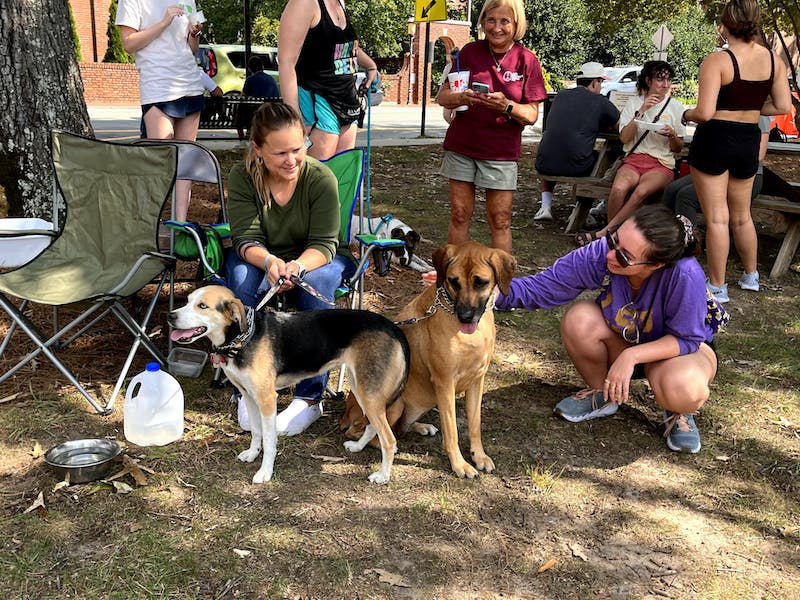 The Alamance Humane Society brought his own dogs to his annual dog day mixer as a way to educate the Elon community about dog adoption. The event also featured live music.

Rev. Randy Orwig said the event began as a way to connect students with the community of Elon and Burlington. He said he wanted students to know they are welcome and valued and thinks the dogs have been a great way to spread that message.

“Some years we had students who said, ‘I cry myself to sleep.’ They weren’t sure about some things, but they came here and it was very helpful to them, so we thought that was a great way, plus they won’t come to us – they’ll come to see our dogs,” Orwig said. “That way people know we’re nice people too, and it’s a nice way to introduce ourselves.”

She said she believed there was a rift between Elon’s students and local residents. But, Stevenson said the blender gave her and her dog the opportunity to meet new people.

“I know there’s kind of a mindset between us and them between the students of Elon and the surrounding community and the people of Elon and Burlington,” Stevenson said. “It’s a way for us to all come together for our love of dogs and music and celebrate all of those things, and it’s also a great way to spread the word and inspire people to adopt animals.”

Although the mixer is annual, Orwig said there will also be an event in the spring called “Pet A Puppy,” a stress reliever for students during exam time.

The dachshund derby returns to the Oktoberfestival