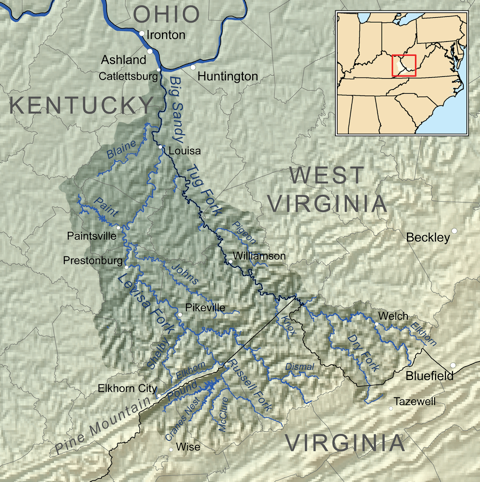 Editor’s note: This is the second in an occasional series on Kentucky’s river basins.

The Big Sandy River is 27 miles long, formed by the junction of its Levisa and Tug Forks, at Louisa, Lawrence County.

From Louisa, the river flows north, emptying into the Ohio River at Catlettsburg, Boyd County, on the common border between Ohio, Kentucky, and West Virginia. The Big Sandy River and its Tug Fork form the southeast boundary of Kentucky.

Located in southwest West Virginia, the Tug Fork is 154 miles long. The Levisa Fork is 164 miles long and originates in southwestern Virginia as the Russell Fork, a whitewater river celebrated by rafters and kayakers near Elkhorn City, which crosses Breaks Interstate Park.

The sources of the two forks are about 20 miles apart. The forks flow in a nearly parallel path, often 25 to 40 miles apart, to their confluence at Louisa.

A narrow waterway, the Big Sandy River gets its name from the presence of extensive sandbars, created by floods and exposed during droughts.

Native Americans called the river Tatteroa, Chatteroi, and Chatterwha, according to Native American Placenames of the United States, published by the University of Oklahoma Press in 2004.

The area was settled later than the rest of the state due to Indian hostilities along the upper Ohio River and geographic barriers. The Big Sandy Valley had an isolated frontier aspect until the early 1800s. Settlers came overland in small groups on horseback through gaps in the mountains or floated down the Ohio on flatboats.

Early settler Alexander Catlett and his son Horatio arrived at the mouth of the Big Sandy River in 1798, and the town of Catlettsburg, named in their honor, grew around the tavern Horatio opened in 1808.

The Big Sandy River has been immortalized in old fiddle tunes and modern country music, including the hillbilly classic “Bury Me,” by Dwight Yoakam, with vocal backup by Maria McKee.

There are three main lakes in the Big Sandy River watershed:

The lake was impounded from the Levisa Fork of the Big Sandy River. Construction of the 195-foot-tall dam, the tallest in eastern Kentucky, began in 1962. The 16.5-mile-long lake opened in 1968.

At the Summer Pool, at elevation 757, the lake is 1,131 acres in size, has 40 miles of shoreline, and is 84 feet deep just above the dam. The winter pool elevation is 735. The 22 foot drawdown to the winter pool reduces the lake to approximately 780 acres in area.

The KDFWR website provides fishing regulations, a link to fishing forecasts and details of boat launches and shore access 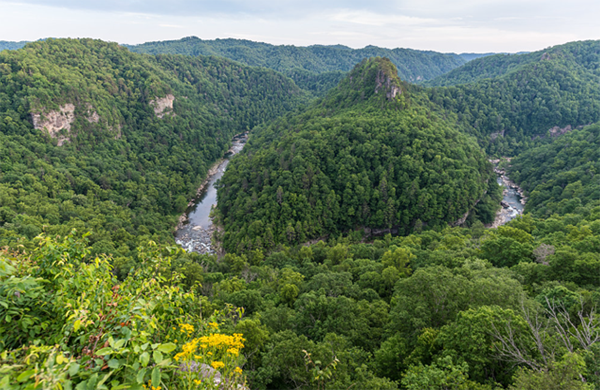 • Paintsville Lake, northwest of Paintsville, is held by Paint Creek, a tributary of the Big Sandy River. The lake filled in 1983 and is maintained at an elevation of 709 meters year-round, with an area of ​​1,139 meters. The lake is 18 miles long and about 90 feet deep at the dam.

Paintsville Lake State Park, established in 1986, is open year-round. The 242-acre park sits on the southeast shore of the lake, about seven miles west of Paintsville off Ky. 172.

Facilities include a campground, with 32 full-service sites for RVs and 10 walk-in sites for tent campers, a restaurant, and three trails along the lake, including the Dawkins Line rail trail from 18 miles, open to hikers, mountain bikers and horse riders.

The scenic mountain lake is bordered by rocky cliffs and pine and hardwood forests. In many shady, steep hollows, lush stands of mountain laurel and rhododendron grow along the shore.

Fishing regulations, a link to fishing forecasts and details of boat launches, haul sites and shore access are available online. 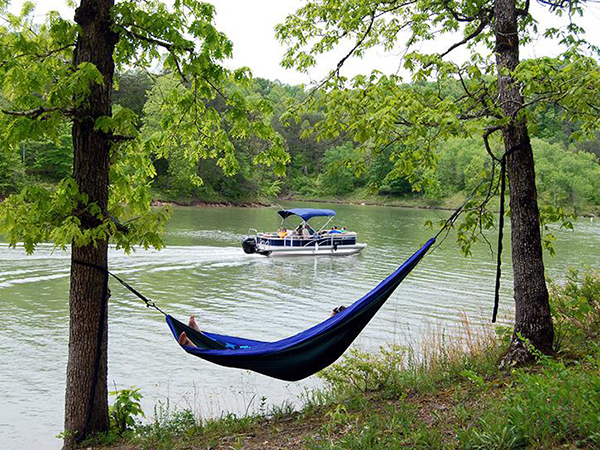 There are three islands. One island sits just above the dam, the second at the mouth of Twin Branch, and the third at the former site of Carter Bridge.

Lake Yatesville State Park, which spans 580 acres, sits on a peninsula on the east side of the lake off Ky. 32.

The campground, built in 1999, has 47 campsites and a bathhouse. There are 16 boat-accessible campgrounds for primitive camping along the lake.

For fishing regulations, a link to the fishing forecast and details of boat launches and bank access, click here: https://app.fw.ky.gov/fisheries/ waterbodydetail.aspx?wid=152

Art Lander Jr. is outdoor editor for the Northern Kentucky Tribune. He is a native Kentuckian, a graduate of Western Kentucky University, and a hunter, fisherman, gardener, and nature enthusiast. He has worked as a newspaper columnist, magazine reporter, and author and is a former editor of Kentucky Afield Magazine, editor of the annual Kentucky Hunting & Trapping Guide and Kentucky Spring Hunting Guide, and co-editor of the Kentucky Newspaper Column. Afield Outdoors.

Boat tours are a great way to soak up the scenery and ambiance of this unique region of the state.

The Big Sandy River Basin is home to diverse populations of fish and wildlife.

The number of big game in the basin is impressive. In addition to wild turkey and white-tailed deer, elk and black bear are present.

Kentucky’s black bear zone is a large area, over a third of the state. The 47 counties are divided into 10 units. All counties in the Big Sandy River Basin are open for bear hunting.

Aerial and ground surveys have confirmed the active presence of bald eagle nests in three counties in the Big Sandy River basin — Lawrence, Pike and Knott.

The Big Sandy River Basin is a unique region of the state. The steep and rugged mountain terrain flattens out as small forks favorable to boaters and anglers converge and enter the Ohio River at the northeast corner of the state. It’s no wonder the area, with its rich ancient history and scenic terrain, attracts visitors.