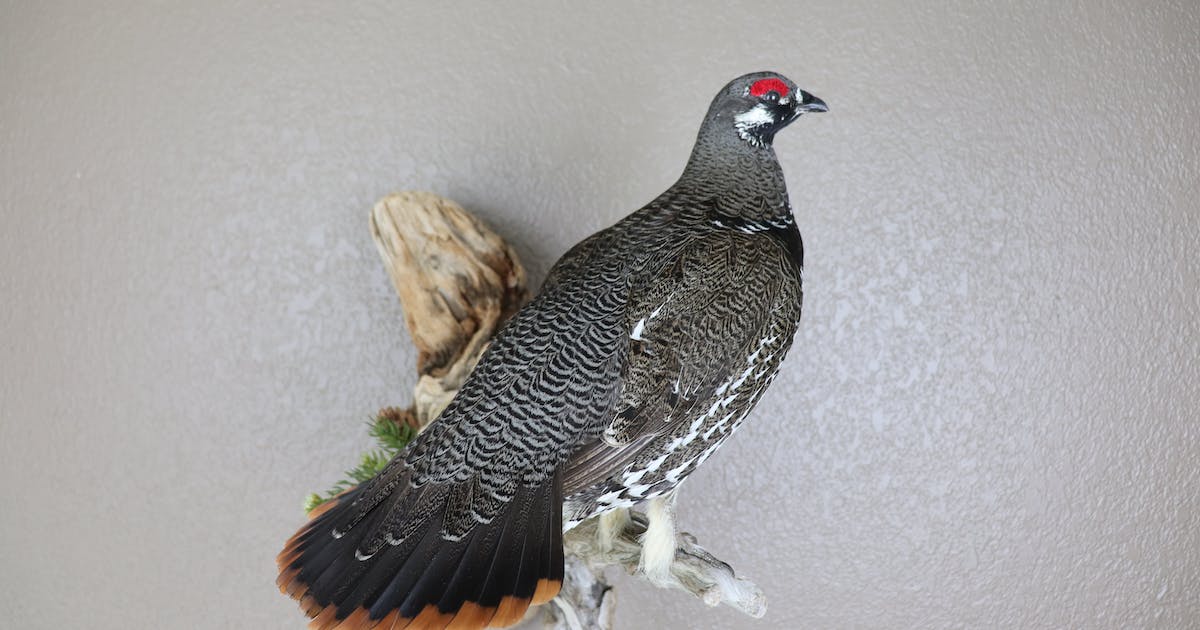 She is first and foremost a mom, also a wildlife ecologist, instructor, dog trainer, hunter. . . and now, taxidermist.

Meadow Kouffeld, 38, of Grand Rapids, is all this and more. Born and raised in northern California, where as a little girl she showed chickens at local fairs, Kouffeld landed in Minnesota about 15 years ago when she entered U University, where she attended studied ruffed grouse and their habitats.

In the years following her master’s degree, she worked for the Wisconsin and Minnesota Departments of Natural Resources and for the Ruffed Grouse Society. She also hunted ibex with her sister in Kyrgyzstan and was one of four finalists in a global women’s competition sponsored by Safari Club International that tested hunting and shooting skills in scorching south Texas in August 2018 .

His long-standing interest in art is not mentioned in this brief resume – a fascination with shapes and colors that helps shape his developing career as a taxidermist.

“But so far, I’ve never been brave enough to take the leap as an artist,” she said. “I’ve always needed a living. Art has never been an option.”

Kouffeld’s father grew up in the Netherlands and was at one time a gun carrier and loader for wealthy clients of a large estate. was possible in Europe, he took with him samples of his taxidermized birds.

“As a girl, I was always close to her taxidermy,” she said. “I wanted to learn how to do it, and finally one weekend while in college at Humboldt State, Calif., I decided I was going to go there to ride a scotter. surf (duck) that I had shot. It was a very smelly bird to work with, because sea ducks have oily feathers. But it went pretty well. ”

Now a natural resources instructor at Itasca Community College in Grand Rapids, where she has an 80% appointment to teach and run the school’s annual wildfire academy, which welcomes 900 participants, Kouffeld again channeled his inner artist – and taxidermist.

“When I started school, we didn’t have any mounts to help educate the students,” she said. “It’s one thing to talk about a bird, for example, its color and its feathers, and another to hold and feel its shape and see it up close. The school supported my taxidermy and I am very grateful. ”

Kouffeld became a licensed taxidermist two years ago and opened a store in her garage in Grand Rapids (woodsandmeadowllc.com). To expand the species of birds she can ride for classroom instruction, she has obtained state and federal permits to own salvaged non-game birds such as songbirds and raptors. The latter often come to her when road accidents are recorded by conservation officers from the Ministry of Natural Resources.

“I have two goals,” she said. “One is to build our collection of educational birds at school. The other is to grow my business while continuing to develop my taxidermy skills.”

“Meadow is an avid outdoors person with a solid background in hunting and wildlife, and a long-standing interest in art,” said Dick. “So it’s no surprise that she is interested in taxidermy.”

Hunters who bring birds to Kouffeld usually have a general idea of ​​what they want their finished mounts to look like.

“But they’re also looking for suggestions,” she said, “which I’m happy to offer. But in the end, the bird itself drives what can be done. That and his condition. a bird has a broken wing, for example, it’s quite difficult to make a flying mount. ”

Ruffed grouse are popular with hunters as a souvenir of their forays into the field, as are ducks and wild turkeys. A few recent Kouffeld projects are less common: a Wilson’s Snipe and a Sandhill Crane.

“The customer who brought the snipe to me wanted it to fly and also wanted it as a table stand,” she said. “Simple and clean, that’s how she said she wanted it. I was happy with the way it turned out.”

Kouffeld also rode a Double-crested Cormorant, a notorious protected bird among anglers, especially on Leech Lake in northern Minnesota, as a walleye eater.

“Most anglers hate cormorants, and just about everyone thinks they are ugly,” she said. “But up close they are actually quite beautiful.”

In August, Kouffeld attended a taxidermy school in Idaho which she said taught her “how to streamline the taxidermy process.”

“Next spring I’m going back to the same school to learn how to make big game shoulder mounts,” she said. “I also hope to one day attend sessions on full frames. I’ve done mostly birds so far, as well as European big game mounts, because I wanted to start slow. ”

The net income for Kouffeld’s business has been limited so far, but she hopes her efforts will eventually allow her to cut back on dog training and other concerts she’s held to supplement her teaching job.

“I am the biggest critic of my work,” she said. “But luckily my 8 year old daughter Heidi is my biggest cheerleader. She loves everything I do.”

Does your dog deserve a private park?